It all started in a small farmhouse in the tiny village of Zbaraz, located 17 miles northwest of Arborg, Manitoba where Mike Shachtay Sr. began the legacy of Shachtay Sales & Service. Mike left the family farm to travel to Guelph, Saskatchewan to get factory training to become a Smith-Roles farmer agent. Upon his return as a Smith-Roles dealer he began selling welders and air compressors to the neighbours and local farmers. As Mike Shachtay Sr. began to sell more and more his product offerings grew. Today, after 50 years in business, Shachtay Sales & Service is located in Arborg and is a 2nd generation, 100% family owned business. After Mike Shachtay Sr's untimely death in 1983, Rita and Mike Jr. Shachtay continue to operate Shachtay Sales & Service as a major player in the Ag, Lawn & Garden and recreational markets. They provide services not only to the Interlake and surrounding areas, but also services markets as far as Europe and Central America. 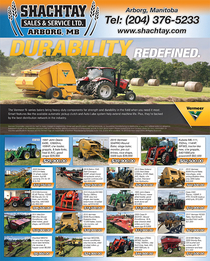